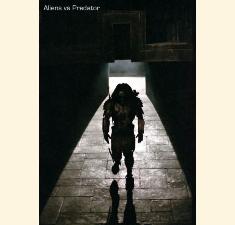 Talking about movies with friends is one of my favourite pastimes – in fact I have a reputation for doing re-enactments of movies… whether I like them or not! I can often be found telling the tale of the latest overlong Korean sci-fi movie or remind everyone of the dialogue in our mutually favourite movie scenes. Someone once said, “Oh… if you haven’t seen it… ask Louis – he’ll do a 10 minutes version!

Well, a few weeks ago I scored maximum pub-points with my telling of the Aliens Vs Predator movie. Oh yes, I have seen the whole thing – all 139 scenes of it, stuck on a wall in an old warehouse in downtown Prague.

Those wonderful people at Fox took a group of hard-nosed news-hounds from around world to the set of AVP, which shoots in Prague until the middle of February. For two days we got ferried around to see sets, miniatures, creature costumes, meet the cast, the crew and have words with the director; Paul Anderson .

I got quite worried when I heard Paul Anderson had the reins of this project, I mean he made Mortal Combat and Soldier and I am yet to find one person who could say how good they were. Mind you, he also did Resident Evil , a great game-to-movie adaptation and the enjoyable Event Horizon .

However, from visiting the set and seeing how the movie is being put together and the talent that Anderson has pulled into assist him, this movie looks like very exciting.

What’s it about?
The movie is set present day. In the Antarctic, an archaeological expedition headed and financed by billionaire robotics industrialist Charles Bishop Weyland (Lance Henriksen) have heard tell of an ancient pyramid under the ice.

Finding a way under the ice from an abandoned whaling station, they discover a massive pyramid decorated with hieroglyphics unlike anything they have ever seen.

They go deeper and deeper in, finding more and more strange artefacts until they find a sarcophagus with some kind of clock mechanism. As humans always do, they fiddle with things and open a “world of hurt”

Oh, did I mention that the pyramid is a training camp for young predators and that they are on their way to Earth for the weekend? And part of the training is to hunt Aliens? "Whoever wins...we lose", the movie’s tagline seems very appropriate.

Lance Henriksen (Millennium, Near Dark, Aliens) is ‘Charles Bishop Weyland’.
So, let’s get the connections explained. ‘Bishop’ was the android in Aliens and ‘Weyland Yutani’ is the corporation in the ‘Alien’ universe. If you remember Alien 3, Henriksen played Weyland and was after Ripley and the Alien embryo….
So the story is that ‘Charles Bishop Weyland’ is the father of advanced robotics and that is why some of the androids look like their Dad… makes sense. Maybe ‘Yutani’ looks like Bilbo Baggins?

Colin Salmon (The World is not enough, Resident Evil, Die Another Day) – plays ‘Max Stafford’ tough, practical security guy. He is a good choice for ‘intelligent muscle’… and of course he would be called Max… or Dutch or Clint or…

Sanaa Lathan (Blade, Out of Time) is Alexa Woods. Blade’s mum plays the sexy, smart and ultra-tough ‘Lex’. She knows the Antarctic and knows how to kick ass... but is she a Ripley?

Raoul Bova (Avenging Angelo, Under The Tuscan Sun) is Sebastian Wells. An Archeologist.

What’s it going to look like?
From talking to Anderson and the production designer Richard Bridgland , who did Resident Evil and was art director on the fabulous 1995 Richard III, both agreed that the original Alien and Predator movies were scary because we didn’t really get a good look at the creatures until halfway into the film.

They also loved the two original movies because they were shot tightly and there was a lot going on with shadows and dark spaces. Ok, Predator was in a jungle, but it was still claustrophobic.

Looking over Bridgland’s bookshelf I spotted Giger, Frank Lloyd Wright and many other great artists and designers – there was even a copy of the book detailing the Jubilee Line extension “you get influences from everywhere” smirked Bridgland.

One thing is for sure it will look great. Like him or not, Anderson has always made a lot of his sets. Resident Evil looked incredibly slick and those who cannot stand Event Horizon all agree it looked fantastic. After walking around a couple of the pyramid sets – and seeing the detail they have worked into the architecture, I hope they light it so we can see some of it on the celluloid.

There are wonderful 10 feet tall sculptures of Predators and at the bottom of pillars in the largest of the pyramid’s chambers are unnerving representations of charging face-huggers, scary stuff.
The scenes that take place in the Antarctic also look amazing and we got to see some of the ‘whales graveyard’ set – it reminded me of the massive ribcages in Pitch Black, eerie in all white though.

I was also lucky enough to get some time with the miniatures team who took us over the sets of the whaling station itself. Amazing detail and so great that it will not be done using CG. Lately I have found movies using CG for big effects start too look so unreal, there is something missing. We even got to see some tests of the station collapsing into the ice... Oops was that a spoiler?

Well let’s get some of other set related spoilers out of the way here. We get to see deeper into Alien eggs, we get to see some great new weapons and we get some shots inside a Predator ship… and they all look great!

So what about the creature effects?
The creative talents of Alec Gillis and Tom Woodruff , who worked on Tremors, two of the Alien movies, Starship Troopers and many more under their mentor Stan Winston, are leading the creature effects crew. Their company is called ADI, Amalgamated Dynamic Industries… well they can’t be good at everything.

They were put through a long pitch process to get the gig but won it mainly because Tom Woodruff was the Alien in 3 movies – yup, I met the actual guy in the rubber suits… neat.

What was great was walking around a room full of Alien and Predator heads, rubber suits, Alien Eggs and a Predator weapons – look out for the cool Shuriken. We also got to see a few things we shouldn’t – in a big box marked ‘hybrid’ – but enough of that. I don’t want Fox’s lawyers on the phone.

Again, it was impressive to see the level of detail going into the production. ADI have developed an amazing articulated robotic body for the Alien as well. They can basically move the body around with hydraulics until they get a performance that they like. Then play it back on a computer, seeing all the key movements as points, which can then be tweaked to make it all smooth an natural looking. They then hit “go” and play it back – the model then enacts the movements exactly. Apparently this is most complex unit ever built, fitting that is should portray the wickedest bug ever!

And whilst I remember it, John Bruno (Abyss, T2, True Lies) is in charge of all the visual effects in the movie, he is one of the best in the business… and he dislikes CG immensely Hurrah!!! We heard the tale about him actually putting a jet plane on a crane on top a tall building because it looked better than a composite shot in the computer. Cool guy and certainly one that will make AVP feel realistic.

Another highlight for me was seeing the Predator in the flesh. Standing 7 feet 9 inches, he is tall, very tall… and very mean looking. Mind you, I then got to see the mild mannered Ian, 7 foot 1 inch and from Newcastle, who is inside the costume. He plays the part very well – is he destined to be the David Prowse of the AVP world?

The whole team have really stamped their own look and feel onto the movie, but also made it fit well with what the fans know and love from the movies, games and comics.

Like I said, I know the end of the movie – I have seen what was in Anderson’s head and translated to the storyboards – but I am not going to spill the beans here. Catch me in the pub and might act out a 10 minute version.