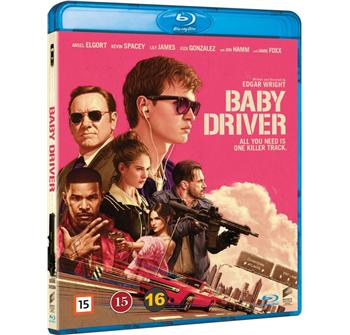 Stor tak til Universal Sony Pictures Home Entertainment AB for at stille interviewet eksklusivt til rådighed i Danmark for CinemaOnline.

Why did you give the cast an app to listen along to whilst reading the script?
I think when they read the script I really wanted people to get a sense of what the movie would be like and to really think about the movie in a way that the screenplay and the music were wedded together – essentially that you couldn't think about the film without thinking about the song. Sometimes if you write a song into the script you're sort of relying on people to either listen to a file you've sent them separately or just find the song online. In this case we actually built this component into the script; it was an app that a software designer in London made where the script had a button next to it of the Baby Driver symbol and you would press. For example, the symbol would be Baby's face with sunglasses and earphones in. You'd press that and it'd start playing a song. So most of the actors, including Jamie Foxx, Kevin Spacey, Jon Hamm and Ansel Elgort read the script like that with the music playing.

In the special features you seem very relaxed when we see you on the first day with Ansel racing the car right behind you. How were you by the end of the shoot?

[Laughs] At the end of the shoot you're just frazzled because you're operating on no sleep and too much coffee. Usually in the final couple of days it gets relaxed again. The last big day is always you running around trying to get everything. There's always lots of things going on, but then the last few days is kind of fun because usually on my movies you end up doing inserts and the crew starts getting smaller and smaller and the cast aren’t all on set. I think the last three days of the shoot we just shot close-ups of things – like steering wheels, gear sticks, pedals, tachometers, etc, just endlessly. But that's actually quite relaxed and fun because typically you're not recording sound so you can sometimes play music whilst people are doing shots of endless, endless, endless close-ups.

It's amazing how real the car chases were. Did you ever worry about being able to pull them off?
Usually the biggest worry whilst you're doing those car chase scenes is 'are we going to run out of time? Are we going to get kicked off the road?' When you're shooting on a freeway and the Georgia police say 'you've got 6am until 2pm' they mean 2pm, they don't mean 2.15pm, they don't mean 2.07pm. So usually doing scenes like that you're solely thinking ‘are we going to get all these shots? Can we cram it all in? Have we got enough time?’ So that's my main source of anxiety whilst I'm doing it. It's not so much ‘can I pull it off’ as much as ‘do I have enough shots to make this work?’
The animatics show how meticulous the pre-production process was. That said, did the production throw things up that you needed to deal with on the fly?

The locations sometimes change the animatics or you have to think of another way around something, like - this is how we've drawn it but actually, this location offers something different so maybe we just change the action a little bit to fit the geography of where we are. What's funny in that opening car chase, the route Baby does is geographically correct so if you went to Atlanta you could walk the same route that he drives. A lot of other films cheat in terms of the location – they sort of teleport across town – but for the most part in that first chase it's pretty accurate as to exactly where Baby is going.
Given how fine-tuned the film is, it's interesting to see so many deleted scenes. How did you decide which ones to abandon?
Usually it's about pacing. You show it to an audience and sometimes feel when you're watching it ‘maybe if we took this sequence out this whole section would feel a lot tenser.’ So usually it's just about pace. None of the scenes that we took out are ones that I didn’t like but I don't miss them in the movie because usually it's just about the overall pacing of it.
The film has become a pop culture phenomenon, especially with all the fan art. How impressed are you with the fans?

It's amazing. The fan art started after the trailer and continued until today. Some of it, I think, is just the delineation of the characters and even their costumes – so people respond to the fact that you can actually identify all of the characters. Sometimes in action films you have goodies and baddies that are wearing black suits and goodies and baddies that are driving black cars. Apart from the actor's face you can't necessarily tell anybody apart. We spent a lot of time delineating the characters – what they wear, what their make-up is, what their haircut is – and I think people responded to that. They start to draw fan art because they come out of the movie with indelible images in their head and they start drawing them. It's always incredible to me what people pick up on.

You cast musicians in cameos, which viewers may have missed in cinemas. When they watch the film again, who should they look out for?

Some of them are pretty obvious, like Flea is heavily featured and so is Sky Ferreira playing Baby's mum and so is Paul Williams, who plays the Butcher. I guess the more blink-and-you'll-miss-it cameos are like Killer Mike and Big Boi, who are seen talking to Kevin Spacey in the restaurant when he's at the bar. You see them in a wide shot and some people spot them and some people don't. Then the other person who's a bit more blink-and-you'll-miss-it is Jon Spencer of the Jon Spencer Blues Explosion, who sings the opening track – he appears towards the end as a prison guard. He has a line on camera so I thought that was a funny thing of bookending the film with him. He's the first voice you hear and the last.

Lily James says you have impeccable taste in music, but do you have any guilty pleasures?

Many of the actors in the film are also musicians. Was that partly why you cast them?

It wasn't the only reason to cast them. I cast them because they were right for the part. But the fact that they had musical chops was a greatly beneficial thing - Ansel, Jamie Foxx, Kevin Spacey, Lily James, Eiza Gonzalez, pretty much everybody except Jon Hamm, who to my knowledge does not have a recording career... [Laughs] Not yet.