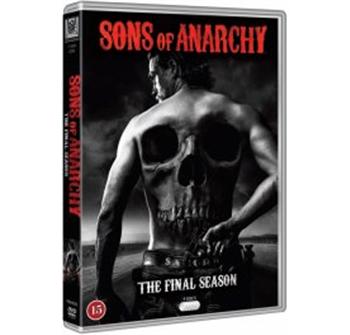 Q: How is it for you to be working on something for a long period of time and now it’s drawing to a close. Is that sort of a sad time for you?

A: It hasn’t really sunk in yet. You hear it’s going to end, we’re all told that. But you still have to do the every day work. So you don’t have time to think about what it’s going to be like. Seven years is a long time. To be with the same people you know and watching people come and go is a unique experience. It doesn’t happen too often in television were you’re on a show for that long. And the crew has been here. It’s been like a family. So I guess I haven’t really thought about what’s going to go on after this. Probably afraid to think about it in a way, you know what I mean? I was on a show called Deadwood and that ended but it was kind of a surprise. So when we were told, for whatever reasons, they were going to stop the show that was more of a shock. We planned to do two more years at least. But, they couldn’t come to terms, the people upstairs and with whomever. So that was a shock. This isn’t a shock but it’s something I guess I try not to think about right now because I've got work to do. It’s been fun.

Q: This character’s always been the underappreciated patriarch of the family. Was it always that way or is that what you brought to it.

A: It was like that since I was born. I was always the underappreciated one in the family. But no I guess it developed that way because I was only supposed to be here for two episodes. And I guess the Foxes that be and Kurt enjoyed what I did. So they kept me around and it developed into this thing. They didn’t even know what it was supposed to be. I just ended up being. It was one of those things that was lucky for me.

A: Well thank you. Yeah, it was kind of fun that it worked out that way.

Q: What has been your best and worst surprise about being part of the show?

A: I don’t know if there have been any worst surprises. The best surprise is the most gratifying surprise. Is the way it’s taken off with the fans. I travel around a little bit and people on the street coming up to me. I was in the airport and this guy a little younger than me comes running up to me. He says you ever watch Sons Of Anarchy? And I kiddingly said, ‘only when I’m on it’. He goes, I thought that was you. It’s always a surprise when people come out of nowhere and stop you or just wave. It’s very popular.

A: What do I like about it? I guess for me it’s a chance to go down to a lot of different emotions and a lot of different parts of myself I can discover. It’s a challenge to make this character real and centered and believable. The work is fun. It’s not boring. And I hate the boring. I do TV once in a while. I don’t do it much because it’s boring. Fortunately I’m in a position where I have a job and I can say that. There was a time when I would naturally take any job. You know, just to eat and work. But now I’m afforded the privilege of being a little choosy. So I like to do challenging things now.

Q: Unser’s kind of like Gemma as a moral compass on the show. Have you had a good time developing the character?

A: I do have a lot of policeman all over the country that watch the show and they have told me, they’re huge fans. They have told me that I play the character true to them because you don’t want to put a record on somebody. You don’t want to do that if it’s just a one time kind of thing. You got to use your own little discretion and judgment. I think that’s what I try to do, what was good for the town. It’s out of hand now. But, I’m no longer the chief of police. When I was, the deal we had was you could be the motorcycle gang here and I don’t know what you do. They had helped me with protection, protecting my interests. I had a trucking company. So they kept the gangsters away from my shipments and stuff. So it was a compromise, an understanding. You keep your crap outside the city. I’ll let you live in Charming. So that’s the deal you had. You make your deal with the devil. And Gemma, I don’t see her bad as far as what she’s done. I knew Stahl was crooked. So it’s the lesser of two evils there. Not even that, it’s Stahl was bad. I can’t remember all the characters that came along. The white supremacists, Adam Arkin, we wanted them out of town. So I never thought of myself as a bad cop. I just wanted to try to make things work.

Q: Is that part of the appeal of a show like this and indeed Deadwood? That it’s morally complex. It’s not about villains and heroes.

A: Right. Well in the Deadwood case, a society works. And in here, in Charming, it’s how this society works, this town works. If you look at the mob in New York State and Chicago, they had an understanding in a sense. Sure they got into busting people and this and that. But a lot of them knew what was going on. Cops were on the take and criminals were doing their thing. You can’t arrest everybody and you certainly can’t kill everybody. You have to have a society.

Q: What you think of motorcycle gangs?

A: I think there are good people in the gangs. But I think there are very bad people in there too. Certain gangs are worse than others. Certain motorcycle gangs aren’t gangs, they’re groups, and they don’t do horrible things. But you’re always going to have the black sheep or whatever you call it, the wild rebel who is off doing something that you really don’t approve of. Or they’re taking advantage of their status. In the military, you have your good soldiers and you have soldiers that do bad things you know what I mean? In any army, it has good soldiers and bad soldiers. Of the whole group, it’s okay. But I wish they’d weed out the ones that give them the bad reputation. It would be a lot better for people. But you can’t always get rid of them. Bullies are hard to get rid of.

Q: Since you’re a part of the show do you follow the news? About the gangs?

A: I can’t help but hear it. I don’t seek it out but I hear it. I know what’s going on. I came from a pretty rough neighborhood so I grew up with it.

Q: Where was that?

A: Newark. So you know you just live with it. You live with crime. And you learn how to walk down a certain block and how to run down a certain block. You even have to form a gang of your own to fend off other gangs. That’s the way it was. I know it seems I’m old for gangs but they were here. Gangs have been around a long time. Like I said, it’s unfortunate now but, it’s the way the kids have to grow up now. They grow up, they’re safer in a gang in a sense than they are alone. Otherwise you get your ass kicked or killed or girls get raped and beat up. You can’t get out. You’ve got to get in.

Q: A lot of characters have been killed off on the show. You mentioned you were only written in to the first two episodes. You’re one of the few characters that actually has a death sentence of sorts. Are you surprised with Unser’s cancer that you’ve survived this long? And would you rather, as an actor, have some sort of a deathbed scene or some dramatic shoot out?

A: No, actually we’ve talked about this with Kurt. Well first of all, a lot of people misunderstand that the seasons aren’t that far apart. So it’s not been seven years. It’s only been probably two and a half years maybe tops from start to bottom with this. You know, it’s like that show 24. Everything took place in a day. So, it’s kind of not been that long. It’s only been maybe two and a half to three years tops. I think the only time they went away for a year and a half. Then everything else after that’s been the next week or the next three days. You know, the season picks up. Which, you got to stay at the same weight. It makes the off season hard. But my father died of cancer. And I told Kurt, he lived for seven years so you know, there’s got to be some hope for people who have cancer out there. And I said no better person than me to be a poster child. So we’ve been keeping my death, as far as that goes, at bay. They’ll kill me when they kill me you know. Do I want to? No. I would dread a deathbed scene. I would dread that. My father didn’t have one. I don’t know anybody that had one. But I don’t want to be killed in a hail of bullets or some shit. You know what I mean? I’d rather ride my motorcycle into a wall or something. He won’t let me ride. I think he thinks I’m going to get hurt. But I do actually ride.

Q: What do you ride?

A: When we go on tours and stuff, we do a lot of charity work. A couple of the guys you know. I always rent bikes. They basically put their t-shirt on and give me a bike to ride for a weekend. So then we’ll ride down to San Diego, all through the Marine camps. You know, we’ve been to Iraq. Four of us, me and Theo, Kim and Boone flew over there to see the troops and stuff. We do a lot of riding. And that’s the only time I ride. I’m too reckless. I really am. I still think I’m 18.

Q: You’ve made it clear how you feel about Gemma. Do you think even after some things she’s done lately, do you think he would do anything for her?

A: I don’t think he would do anything for her. I just don’t think so. I mean it all runs together you know. I think he’s covered for her but he also got her out when he knew she was innocent. And when Stahl tried to frame her and everything he knew, it was proven. And then she was innocent. The girl tried to shoot her and she shot her. So I don’t think he’s gotten her out of anything where he knew she was flat out wrong. I think he stopped, I don’t know if you guys saw the season or not, but he did something against somebody, and he told her that’s it, you either fix this or we’re no longer friends. And she went and made it right. So I don’t think he’ll do it, no. I don’t see him doing anything. I think he would weigh a situation and take it from there. But I don't know, maybe Kurt thinks differently. Then I’ll have to go well okay, yeah, I guess I was wrong.