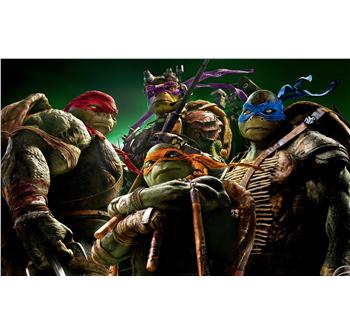 Q: Pablo, were you a fan of the Teenage Mutant Ninja Turtles TV series and comic books before you started work on the movie?

A: I’m a little old (laughs). But, what I did when I first found out I’d be doing the movie was use the internet to research the Teenage Mutant Ninja Turtles and there was a lot to see. I was able to delve into the mythology and look at the different characters. I have been at ILM (Industrial Light & Magic) for almost 20 years and this film became very special for me. It pushed us all to do new, exciting things.

Q: You’re not exaggerating. The technology you used in this film to capture the emotion on the actors’ faces is quite extraordinary. I read that the four actors who play the turtles had something like 138 sensors on their faces. Can you explain that and the technology?

A: We created helmets and attached two HD cameras to the helmets. One camera was on the left side and one was on the right. This was the first time there have been two cameras like this. What the two cameras did was help with the eye and jaw animation. Yes, they had 138 markers on their faces so we could capture the actors’ performances. Our technicians were able to collect a lot of data. There were terabytes of data. The result, we feel, is fantastic. Even though the movie has these mutant ninja turtles and Splinter and Shredder, it was important the performances were all grounded in reality. The technology allowed us to capture the characters’ performances and then translate it on to the digital characters.

Q: It must have been a challenge?

A: It was a challenge. But, I’m sure audiences will appreciate they will be seeing something they have never seen before.

Q: Can you run through how you would shoot a scene? I’m guessing you’d have to do it a couple of different ways.

Q: Because the Teenage Mutant Ninja Turtles franchise has such a huge fan base were you nervous about how they would react to the film?

A: You can never satisfy everybody. Fans all have different views. Often it’s about identifying what the spirit of the franchise is. I think we did that.

Q: How about the look of the turtles. Fans are very protective about what they look like.

A: We were very careful. Jonathan (Liebesman) and Michael (Bay) came up with some designs. We also helped develop them. A lot went into it. We wanted the four turtles to be distinguished from the others. The way we did that was to reflect their personal traits. One is smart. One is the strongest. Another is funny. It’s important the audience accepts them and cheers for them to succeed while they are watching the movie.

Q: Did the fact the Teenage Mutant Ninja Turtles came from a comic book and an animated TV series influence the look of the film?

A: In talking with Michael Bay, he wanted to make this as photo-realistic as possible. Michael wanted us to capture the spirit and character of each turtle because each turtle is different. He also wanted them to be charming. When you have 400 pound mutant turtles that are funny and charming, that has its difficulties (laughs). In designing the characters it was important that we didn’t make them look realistic. You also have to design each turtle so they are different from each other. We thought it was important that on the set we had four actors playing the turtles. We wanted to capture their performances and the emotions on their faces.

Q: What was the most difficult scene for you?

A: I can’t say one particular scene. Funnily enough, when the turtles are having a quiet moment, they were difficult moments for us.

Q: It seems like the great images we see on the screen were the result of an amazing collaboration between acting performances and cutting-edge technology.

A: It really was. We had the actors giving these brilliant performances in difficult circumstances and then we had the technology that allowed us to do amazing things and the animators who used their creativity to reinterpret the actors’ performances. It was a real team effort.

Q: Of course, movement is very important in terms of the action scenes the turtles are involved in. How were you able to capture that?

A: We created a suit, with the shell, with identifiers on them so the computers knew if a turtle was Michelangelo or Raphael or Donatello or Leonardo. Cameras are on the set triangulating where the turtles are. We collect a lot of data.

Q: How do you turn that data into the cool characters we see in the film because, when you see the actors before all of the magic you do, they are guys in funny grey suits with hundreds of triangles on them?

A: A key part is we have animators who re-interpret the data and bring the scenes to life.