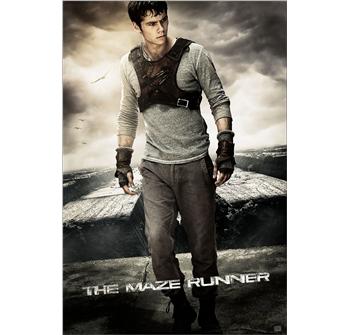 How did you feel when you first read the script?

I connected to Thomas, I thought I would make a good Thomas, it was something I felt confident going out for, that I felt right for. The concept never left my head; it was a script that even after I read it I just kept picturing it.

First you do a pre-read with the casting director, I did that and didn’t get a call-back for a little while. Then I came back in and read for casting executives at Fox, then they had me meet Wes and that was a huge thing, because all of a sudden I was dying to work with him. I love the script, I felt really connected to the character, I liked who they had attached already, I thought, ‘They have really cool actors, this is going to be cool. That’s good, that’s important.’

And when I met Wes he was so prepared. He showed me his whole year’s work of prepping the movie, and he showed me how he saw it for two hours. He had it all, his artwork’s amazing. He showed me sketches of The Grievers, and previz videos of how he wanted to shoot scenes, just on his computer. Then after that, I tested for it. I read with Kaya and Aml, then a couple of weeks later they called to say I had it, and I was excited.

What was the toughest day for you on set?

There were certain days that were really tough physically, and then days that were tough mentally. They didn’t correlate in a way, it was weird. You’d think the toughest days would be where I’m spending 15 or 16 hours just doing the running sequences, or if I’m on a wire and it’s draining physically, but funnily enough some of the toughest days came when I was really frustrated with myself in a scene, just because I cared about doing the movie justice. I had so much confidence in the film, and I didn’t want to let the movie down. I knew Wes was killing it, and the cast around me was amazing, it was such a great story, and I just wanted to be up to par. And I’m really hard on myself anyway, so there were days when I would get down on myself.

It happened a couple of times when I was doing scenes in the pit, I don’t know if I got cabin fever because I was in this hot hole with flies on my face for fifteen hours, so maybe it was just that - that was the reason I was a little hot tempered. But Wes was always so good at reinstalling that confidence in me, and getting me back on my feet and settling me down.

And what was the most fun day?

Even on the tough days it was always so great just being there with my buddies. The toughest days were actually when I was by myself, and they were all back at the hotel (laughs).

I really loved the wrestling scene, when I first get tossed in with Will to prove myself. That was a scene we rehearsed the first week of pre-production, and I love the energy of it. It’s Thomas’ first night and they throw him in the ring with the biggest guy, all of them testing him a little bit. I loved those shots of Ki Hong watching, I love that build and foreshadowing. That whole first night party sequence was fun - whenever we were all on set were the party days. It’s a different energy when you have all of us there.

A lot of people said the film was more intense than they were expecting, how does that make you feel?

That’s so cool to hear man, I think the tone of it really surprises people - it really does have this intense, serious tone. Everyone’s performance is really, really strong - the movie has a gravitas to it, it has this gritty, real sense to it. I think people may not expect that from what they think the movie is going to be. If they just see the trailer, they assume young adult and all the things that come with it, and it does have those elements to it, but there’s so much more to it.

You’ve done some fan events, what are Maze Runner fans like?

So far it’s been similar to what I’ve experienced with Teen Wolf fans, same age range, same passion for it. They’re just very supportive, I almost feel like I don’t deserve it. I mean, I do feel we do, but no matter what, they’re there for us. That’s so cool. They’re just really strong fans; they’re really good at being fans. It’s good to have them backing the franchise.

It was different in a lot of ways. In terms of my acting, the story and the world, and the fact I’m in every frame - which I’m not in Teen Wolf obviously - it was different being the guy who’s there all day, every day, no matter what. And it was a character and a role I haven’t gotten to do yet.

But it was very similar in a lot of ways; I think people would be surprised by how similar the production schedule was. I say Maze Runner is the Teen Wolf of the movie world, because we were very strapped down by not having a ton of time.

One of the things Wes and I first talked about was we would be moving very fast. He said, ‘This is a movie that we would normally need 60 to 70 days for, we’re going to try to do it in 40.’

He said it was good that I was used to going at that pace, because we were going to need to go at that pace. People expect movies to have more glamorous shooting schedules, and people see the trailer and say to me ‘How does it feel to be part of a 100 million dollar movie?’ And I say ‘It’s not!’ But it’s so cool that we’ve made it seem that way.

I’ll never forget Wes saying to me ‘If we pull this off, it’ll be a miracle - people will be like ‘How did they do this?’’ And I said basically: ‘I want to be a part of that, I believe in what’s at the centre of it, and I think we can pull it off, especially with you, sir.’ Wes is such a genius, you know?

What are you looking forward to exploring in The Scorch Trials?

In Maze Runner my arc involves Thomas becoming a man in a very fast five days. He becomes a leader, finding these things inside himself that he didn’t even know existed, going from that newbie to leading this group out and being this guy that everyone looks to. I’m excited for the second film, it’s a different path for Thomas each time.
I think it’s going to be a really cool world. The dust, the sandstorms, the ruined cities, and finding the other Gladers, it’s a great chapter two.

It must be really exciting to be working with Wes so early in his career, because I feel like he’s really going places

Absolutely, I’ve said that since day one. I can’t wait for everyone to know that. You and I know that now, but I feel so grateful that I’m in Wes Ball’s first movie. I think I’ll carry that forever, that’ll forever be one of the coolest things. We work so well together, he’s such a hero to me, he’s also such a buddy - we have this really effortless collaboration. Like I said before, he picks me up so well.

What else do you have coming up in the next 12 months?

Season 5 of Teen Wolf, which is going to be really special to me because every year I don’t know if the show’s going to go another season. When that show is done it’s going to be heartbreaking, because those guys are like my family. It’s my home base, I’ve learned a lot there, it’s been my acting school. In terms of what’s going to happen in season 5, even when we start shooting I don’t know what’s going on, Jeff (Davis) has this thing where he doesn’t like telling us what’s going on, even though sometimes it would help us (laughs). How I operate as an actor on the show is I’m basically like a viewer, but instead of watching the episodes every week, I read them. ‘What happens next? Oh wow, I didn’t see that coming!’

You’re great on the show, you remind me of a young Jim Carrey - are you a fan of his?

I’ve always loved Jim Carrey. There’s a yearbook of mine, when I was seven or eight, where I said my favorite actor was Jim Carrey. I can quote most of his movies (laughs).

Are there any other big franchises you’d like to be a part of?

I’m always game for anything, really. If I believe in the story, and if it’s a character I think I’d fit, and it’s something different to what I’ve done. I’m a super Star Wars geek, I did audition for that movie actually, just so that I could say I’d auditioned for Star Wars, but I am in no way available to do that. I’m just focusing on the stuff I have going right now, making Teen Wolf and Maze Runner as best as they can be and as best as they should be. And when other things come up, it’ll be a very new chapter in my life and career. It’ll be interesting, I’m sort of nervous. I hope I don’t fall flat on my face (laughs).