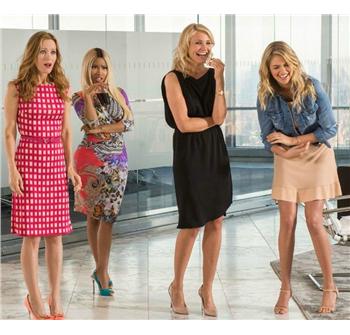 Q: How would you describe your character and her journey?
A: “Kate is a very optimistic person, who is excited about life and happy with her husband Mark. But she is living in a bubble. Her life is all about making her husband happy and I think she’s lost herself. Suddenly everything is completely turned upside down when she finds out that her husband is having an affair with Cameron Diaz’s character, Carly, who doesn't know that Mark is married. Her whole world falls apart. Carly and Kate discover each other’s existence and they join forces to figure out what Mark is up to. Then they find out he has a third mistress (Kate Upton) and they all come together. To figure out how they’re going to deal with the situation and come to grips with what’s happening, these women support Kate in a way that helps her to grow and to work through all the suffering she is going through. I had so much fun playing this character. I was in a good mood every day.”

Q: Kate is quite traditional isn’t she?
A: “She is old fashioned yes, but then she goes on a great journey and becomes a fully formed woman by the end of the story. Kate doesn’t have kids but it’s still not an easy job. I wouldn’t look down on women or men or judge people who are doing that job, being at home, and say, ‘oh that’s nothing; you’re not working,’ because they’re working very hard. It shouldn’t be a thankless job.”

Q: Do you think being at home is harder than acting?
A: “Oh yes for me it is so much easier to go to work than it is to be at home (laughs). It is a lot of work running a home. When I’m not working, I’m raising my kids, keeping the house together and keeping our lives afloat. People who are doing that job are working their asses off. And raising kids is fun, but also hard. From the time they're born you don't sleep. You give up everything that you do for yourself, to give to your kids. That is a really great thing and it probably makes you a better person in a lot of ways, because you have to be selfless, but it's taxing.”

Q: How did you, Cameron and Kate get on together during the filming of THE OTHER WOMAN?
A: “I fell in love with Cameron and Kate. We’re so supportive of one another, and we’ve been like that since day one. They’re really good girls. About three weeks after we wrapped the movie, I was sitting in my family room at home, and I started thinking about Kate and Cameron. I just burst into tears, because I missed them so much.’

Q: How important are your friends to you?
A: “Friendship is so important. When I had little kids, I wasn’t focused as much on my girlfriends because we all had young children and they swallow you whole (laughs). You have no life when they are little. As they got a little older, my friends and I accidentally started a monthly girls’ get-together. Now we have to do it every month. We support each other. We’re always there for each other. It’s a different understanding and support from the kind I get from my husband. What I get in my relationship with my husband is great, but my girlfriends are everything to me. I love these women and I will be friends with them for the rest of my life.”

Q: What do you actually do with your friends?
A: “We usually book a hotel room, and we check in as early as we can, sometimes around ten thirty in the morning. We sit there for hours and hours and hours, until two in the morning and talk and talk and talk and drink wine. We work through all our problems, everything that is going on in our lives, and we have fun with each other. We talk about what we're going through, what we're struggling with, what we're trying to accomplish: kids, families, husbands, just get it all off of our chest. It’s very grounding.”

Q: There are some wonderfully funny moments in the film with a lot of broad physical comedy. Do you have any favorite scenes?
A: “The broad comedy came from Nick Cassavetes, which is interesting; you wouldn’t think that kind of physical humor would appeal to him, because he’s directed a lot of dramas. But he would really push me to go bigger and bigger comedically and to go outside of my comfort zone, which was good for me. Whatever I would do with the scene, he would push me to do 30 percent more. There is a funny scene when Cameron and I land in The Bahamas where we are investigating my husband’s business deals. We are driving in a convertible Jeep, and Carly (Cameron) tells me I could go to jail, because of something criminal that my husband might have been involved in. At first, my reaction was like any normal person’s reaction would be, which was worried and upset. Then Nick said, ‘oh no, no, no. Kate would be trying to climb out of the back of the Jeep.’ I thought there was no way that a person would try to climb out the back of a moving car, but Nick said, ‘Kate would do it. So I did it and it sounds really crazy, but once I did it, it was so much fun, and it made the scene come alive. He was right. He has great comic instincts. He pushed me to a place where I felt uncomfortable, but then eventually I had fun with it.”

Q: In another hilarious scene you and Cameron are hiding in the bushes. Was that challenging?
A: “That’s another moment when Nick said, ‘the bigger the better.’ The gardeners had caught Cameron and I (Carly and Kate) spying on my husband at the house, so we had to stop in our tracks where we were, in the bushes. Cameron was lying down, and I was in between her legs, holding up her legs, as if they were my legs (laughs). She’s very flexible, so I could just bend them all over the place. It was funny. I think she just got a little scratched up though.”

Q: Any more memorable moments?
A: “In another scene Cameron is hiding underneath my dress. I am wearing a wedding dress. It was harder for her than me because it was really hot and sweaty under there! There was no ventilation. There was a lot of tulle and heavy fabric in that dress and I felt so bad for her. It’s not just anyone that I would allow to go underneath my dress. That’s what I told her and she said the same thing to me, too. She said, ‘I wouldn’t just do this with anyone.’ We were working very closely together and it was great.”

Q: You are such a natural at comedy and you’ve have been compared to Lucille Ball and Goldie Hawn, are you big fans of theirs?
A: “That is so flattering. I am a big fan of Lucille Ball. Who isn’t? I grew up watching I LOVE LUCY and I love Goldie Hawn.”

Q: Off the set, I hear there were some funny moments (perhaps not so funny for you at the time) because you were allergic to your leading man?
A: “I was allergic to Nikolaj! At first I thought it would be fun kissing Nikolaj (Coster-Waldau), because he’s very cute, so handsome ... and I’ve been married for seventeen years. So I was looking forward to that. Then I kissed him and I felt a burning kind of feeling and I realized I had broken out in hives, where his face had touched mine. They washed his face, because they thought it could have been his aftershave, and we kissed again. Again there were hives all over my face from his face. I’m allergic to his stubble or something. He felt very bad about it and thought maybe his beard was too rough. I’m also allergic to dogs so he thought maybe he had been kissing the dog that is also in the film (a Great Dane) and then had kissed me afterwards, because every time either Nikolaj or the dog touched me, I would break out in hives.”

Q: Do you have dogs at home?
A: “Yes, we have three dogs. I love them but I am allergic to them. I start itching and go snotty and get runny eyes when I am near them. We also have a bunny. I'm really allergic to the bunny too.”

Q: What is your perspective on the storyline and its focus on infidelity, people who cheat in relationships?
A: “I don’t know. I don’t judge. Everybody makes choices for different reasons. Sometimes people stay in relationships, and sometimes they don’t. Everybody is on their own path and growing when they are ready to grow. Sometimes if you find out your husband or wife is cheating and you’re not ready to grow, you just wait a beat until you are ready and you move on. Or sometimes, you don’t move on. Everybody needs to do things in their own time.”

Q: Any experience with charming cheaters like Mark yourself?
A: “I caught my boyfriend cheating when I was in my early twenties. I was talking to his friend at a party I threw and I was telling him I was upset because my boyfriend wasn’t coming to the party. His friend told me, ‘don’t worry about it. You shouldn’t be so upset.’ And I said: ‘why? What do you know?’ And he said, ‘nothing. I don’t know anything.’ A week later I saw my boyfriend and said to him: ‘I ran into your friend, and he told me everything.’ That was really scary because I was lying. He was like: ‘he told you that I’ve been cheating?’ So I tricked my boyfriend into telling me the truth. (laughs). It was really hard keeping a straight face and looking him in the eye, but he came clean.”

Q: Are men more unfaithful than women, do you think?
A: “I read somewhere that men don’t cheat more than women. Women just keep it a secret. (laughs) I’m lucky, I met a good man. I do have a good husband. Judd is the nicest man I have ever known. But he’s probably cheating on me, left and right (laughs). That would be crazy wouldn’t it? That would just be a huge shocker. That’s how women feel when they find out their husband has been cheating. They’re like, ‘what the heck? I had no idea.’ When the subject comes up, I always say Judd would never cheat, but I don’t really know. What if he’s having this whole secret life? Wouldn’t that be funny? Can you imagine?”

Q: You look lovely in the film, with gorgeous colorful outfits. What was it like working with Patricia Field, who created the fantastic costumes for the film?
A: “Everything was bright and alive and big and fun, which I loved. I’m wearing all grey and black today, but wearing bright colors as I did on the film really cheers you up. It was great fun watching Patricia work, because she puts together unlikely pieces. You wouldn’t imagine that the things she combines would look good, but they do.”

Q: Ultimately what is THE OTHER WOMAN all about, do you think? What can people look forward to?
A: “It is a story about three women that don’t seem like they would get along, but they bond and go on a journey together and in the end they wind up being great friends. It all adds up in a strange way. We grow together. It is a great female friendship movie and it is a lot of fun.”