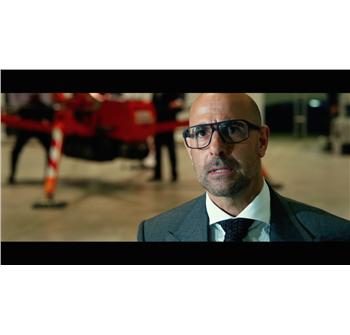 Q: Stanley, were you a big fan of the Transformers franchise, and is that the reason why you wanted to be part of this?

A: Well, I had seen the movies, but I can't say that I was a big Transformers fan. But when Michael (Bay) called me and wanted me to be part of this film, I couldn't wait to read the script.

Q: And what was your first impression after you read it?

A: I was blown away. It had so much humor in it, and it read like a great action film. And I liked my part in it as well. I thought it would be great fun to be part of this.

Q: Who do you play in this movie?

A: I play Joshua Gross. He is the guy who is heading this corporation that makes all the Transformers. He has a big ego and wants to become one of the richest men in the world. But there is another side to him as you find out later in the movie.

Q: You don't mind that you are yet again in a supporting role?

A: No, not at all. Hey, if it's a great part I don't mind being in a supporting role at all. And this was new for me. I learned a lot about the different Transformers. I dove into a world that is usually for much younger people. But I really enjoyed it.

Q: What was it like to work with Michael Bay?

A: I don't think I ever worked with a director who had that much energy. It's infectious. You come to work and you can't help but be excited. And that energy is captured on film. I just hope all the back stories, all the great moments that we caught on camera and didn't make it into the movie can be seen on DVD and Blu-ray. Michael Bay is worth his own bonus feature.

Q: Did you just strictly follow the script, or did you have time to improvise?

A: We improvised a lot. Michael encourages that. And that makes a big production like this even more entertaining because you feel you have a little room to tweek your own performance.

Q: You've been in a couple really good movies lately. How do you pick your roles these days?

A: I am trying to mix it up. I think it's important. You do a drama and then you try to find a comedy next. Science Fiction seems to be in my cards right now.

Q: How did you deal with all the action in this film? Did you have to get in shape?

A: This movie was a good excuse to get in shape (laughs). When you do a Michael Bay film, I think you know what to expect. And you'd better show up prepared. It's grueling, sure. But it's also fun. I look at it that way at least. I get to play like a child again. How could you not like thatâ€¦

A: You said it correctly. This is a very different movie. I am not killing his daughter in this film! â€“ Mark brings certain gravitas to the set that makes you feel very much wanted. And he is a true professional. If I ever knew a guy who comes prepared, it would be Mark Wahlberg. And on top of that he's an incredible actor. He took this movie to a whole new level.

Q: What was the hardest part for you making this movie?

A: It's never easy to be away from your family for an extended time. But that's what happens when you do a big movie like this. Other than that I enjoyed every minute of it. Michael works very efficiently and fast. And I like that. There was not much time wasting on the set.

Q: Where did you shoot this film?

A: We shot in Detroit, in Chicago, Hong Kong and Beijing. It was a busy time for me because I was moving at the same time. So, I spent a lot of time on airplanes.

Q: What do you think of the transformers?

A: They are amazing, aren't they? On one hand they are very surreal, on the other hand they seem very humanlike. And I think with the start of this new trilogy we will see that human element of the transformers develop even further.